TV3 has been banned from filming and using file footage for the remainder of John Banks' trial after showing the politician picking something out of his ear and putting it in his mouth. 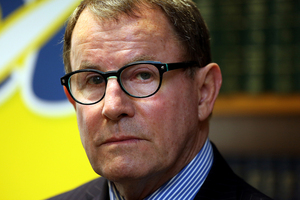 Mr Banks is before the High Court at Auckland accused of filing a false electoral donation return after his failed Auckland 2010 mayoral campaign.

Justice Wylie summonsed TV3's lawyer and deputy head of news to court on Monday after it aired the footage last week.

He said on the face of it, the footage was used only to expose Mr Banks to ridicule.

"I do consider this a serious breach of the in-house media guidelines," Justice Wylie said.

"The issue which concerns me most is the fact that this footage was used in a way which I simply do not consider to be fair and balanced, and it seems to me that the footage was out of context."

Meanwhile, SkyCity casino head Nigel Morrison on Monday told the court he had a meeting with Mr Banks and gave the politician a $15,000 cheque in an envelope. The donation was recorded as anonymous in Mr Banks' electoral donation return.

Mr Morrison told the court he met with Mr Banks for 10 minutes, during which time he handed over a cheque.

He said the company had no wish for the donation to be recorded as anonymous and believed it would be recorded.

Mr Banks' lawyer, David Jones, QC, told the court evidence from internet businessman Kim Dotcom and his staff had been shown to be false and orchestrated.

Mr Jones said Mr Banks had no knowledge that cheques from Mr Dotcom had been recorded as anonymous in his electoral return.

Mr Dotcom had told the court it was at that lunch that Mr Banks asked for a $50,000 donation to be split in half so it could be kept anonymous.

But Mr Banks' wife, Amanda Banks, on Monday told the court there was no discussion of a donation while she was at the lunch table.

Also on Monday, National MP Mark Mitchell told the court an enraged Mr Dotcom had told him at a barbecue he had the evidence to bring down and destroy Mr Banks and the Government.