FBI evidence against Kim Dotcom says his companies made more than $200 million over five years from his Megaupload website, and that he was aware of the site's copyright infringement.

It shows his co-accused were concerned that if the authorities started investigating the website, the internet entreprenuer would take all the company's money and go into hiding.

The High Court in Auckland on Friday lifted suppression on the summary of evidence the FBI has gathered since 2010 against Mr Dotcom, as the New Zealand courts consider the United States' attempts to extradite him and three co-accused. The internet businessman's lawyers had applied for suppression to continue. 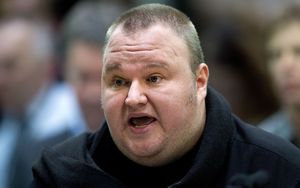 The United States is seeking the extradition of Mr Dotcom and three other men accused of copyright infringement and money-laundering charges relating to the now-defunct Megaupload website.

It details payments of up to $205 million moving from Megaupload users to the company's accounts from which Mr Dotcom was able to distribute money.

It also shows Mr Dotcom talking about wanting to stay under the radar, and downplay the success of the site to the media.

The evidence includes a Skype conversation in March 2009, where Mr Dotcom talked to his chief technological officer and co-accused Mathias Ortmann about how they should prepare for lawsuits should they happen.

Mr Dotcom suggested hiring an in-house attorney to prepare them for anything.

The summary says that in three conversations during 2007 and 2008 between Mr Ortmann and programmer Bram Van der Kolk, the latter refers to the pair as pirates.

Emails cited in the documents show Kim Dotcom often discussing the extent of copyright breaches with others within the company. In one he said he had told staff many times not to delete links in infringement reports if they come from "insignificant" sources". In another he said mass deletions of infringing material should be prevented as they contribute to a loss in revenue.

In 2007, the summary says, Mr Ortmann told another programmer he had a feeling Mr Dotcom tolerated a certain amount of copyright violation because it helped initial growth, but said they should not overdo it.

Mr Ortmann and Mr Van der Kolk talked regularly about copyright issues and the problems it poses for the company. In July 2007 they discussed a move which would see a user redirected through another Mega website before downloading. But Mr Ortmann said it would be shooting themselves in the foot as it proved they looked at the file and therefore "are not the dumb pipe we claim to be." He also said copyright owners could use it against them.

In August of the same year they discussed the presence of viewcounts on downloads. Mr Ortmann said the copyright industry could use those numbers to invoice them for lost revenue.

Two years later, in March 2009, the summary says Mr Van der Kolk told Mr Ortmann that if copyright holders knew they were making millions in profit each month they would try to do something about it.

Mr Ortmann also revealed to his friend and colleague in 2007 that he expected the website to remain online for only a few months. He went on to say that every day since then that had passed without something serious happening made him happy.

The evidence also reveals that Mr Van der Kolk himself had a number of accounts on the website and had uploaded infringed copies of copyrighted material.

The documents say Mr Van der Kolk and Mr Ortmann spoke twice in two years about their fears their boss, Kim Dotcom, would run away with the company's money and go into hiding if law enforcement agencies got involved.

The first conversation took place in August 2007 via Skype. Mr Van der Kolk told Mr Ortmann that the current situation with the company was risky. He said if Mr Dotcom was safe with money he wouldn't mind.

Mr Ortmann responded that Mr Dotcom was operationally dependent on them and could not sneak away with the money. But Mr Van der Kolk raised concerns that if big problems occurred, Mr Dotcom would grab the money and take off with it, adding that he was good at that.

Two years later, in May 2009, Mr Van der Kolk described Mr Dotcom as operating a ponzi-style scheme, but said if that was true they'd be getting more money. He said the chance of the company tripling its profits in 2010 was quite small, whereas the likelihood of them getting in trouble was increasing. He went on to say that if that was the case there would be no way out as Mr Dotcom would grab the last couple of millions and go into hiding again.

Mr Dotcom was arrested at his Coatesville mansion, near Auckland, in January 2012. An extradition hearing for the four men is scheduled for July but is likely to be postponed, as there are a number of appeals before the courts on aspects of the case.