Dressed in a flamboyant black feather dress, the 17-year-old won for top new artist and top rock song for her hit Royals, which has already landed her two Grammys and a Brit award. 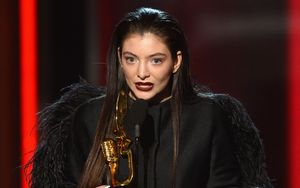 Lorde, whose real name is Ella Yelich-O'Connor, had been up for 12 awards and tied with pop group Imagine Dragons for the most nominations.

Correspondent Sandro Minetti told Radio New Zealand's Checkpoint programme that Lorde may have been dressed in black feathers, but she was tickled pink with her victory.

"The pride of New Zealand is the queen of America once again. It just goes to show you what's possible."

Lorde is the youngest person to top the American charts for 25 years, with Royals spending nine weeks at No 1.

She told the audience in Las Vegas on Sunday that she was grateful to be able to mature in the spotlight.

Lorde sang at the awards ceremony at the MGM Grand Garden Arena, which also included a holographic three-dimensional performance by the late Michael Jackson.