Adventure tourism audit programme OutdoorsMark has been sold because its owners did not have enough time or money to process all the audits.

The scheme's new owners say the backlog of applications is about 400 and all must be processed before November.

Outdoors New Zealand had owned the programme since 2004 but after audits became compulsory, the organisation said, demand increased so fast it couldn't keep up and it was not getting enough Government funding. 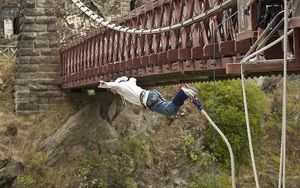 OutdoorsMark has now been sold to Skills Active, the Industry Training Organisation (ITO) for the recreation, sport and fitness industries. Chief executive Grant Davidson said there was a lot of pressure to process the backlog of audits by the November deadline.

Adventure tourism companies that should be registered by the beginning of November, but are not, face possible fines or prosecution.

A review of the sector had been prompted by British father Chris Jordan whose daughter Emily drowned while riverboarding on the Kawarau River in 2008. The following year, Mr Jordan wrote to John Key in his role as Tourism Minister demanding better regulation of the commercial white water industry.

The mandatory safety audit scheme was subsequently put in place under which operators must register their safety systems, consistently record their performance and be audited every three years.

Meanwhile, the future of Outdoors New Zealand itself is uncertain. In the next few weeks, the group will be meeting with its main funding provider, Sport New Zealand, which wants to merge it to create one outdoors organisation.