A large-scale police operation in Buller has uncovered a haul of drugs and firearms.

Search warrants were executed at five properties and four people are facing drugs and firearms charges.

Up to 18 kilogrammes of dried cannabis heads were recovered at an Inangahua address, along with plants still in the drying process. 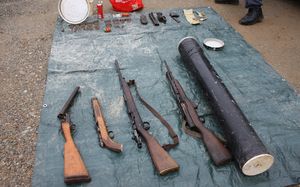 Two sawn off shotguns, two rifles, an AK47 and ammunition were also found.

Operation commander detective sergeant Chris Roberts says he believes Wednesday's operation will have disrupted the supply of cannabis to the top of the South Island.

He says it's a reminder that even rural areas are closely monitored by police.