The mayor of Christchurch says the Government must help with finding a solution to dozens of properties becoming flood-prone since the earthquakes.

Land in some areas of Christchurch has sunk since the quakes and the city has experienced major flooding.

Earthquake Recovery Minister Gerry Brownlee has said the severity of flooding is not due solely to the earthquakes, so it is Christchurch City Council's problem to sort out. 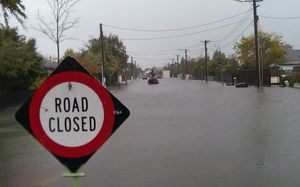 Ms Dalziel said government funding will be needed and the council will be ready to meet with the minister next week.

Mr Brownlee has said flood repair work was the council's responsibility not that of EQC or the Canterbury Earthquake Recovery Authority.

Residents of the flood-prone Flockton Basin dispute that, saying the floods have become worse since the quakes because their land has sunk so repair work should be the responsibility of the EQC.

A spokesperson for flood-weary residents, Jo Byrne, says the EQC Act makes it very clear the Commission must either repair their land, or compensate owners.

"We want our land fixed, we want our houses raised back up to the level they were at, at the time of the first earthquakes," she said.

"Nobody's houses would have had water through them if the land hadn't dropped 50cm. This is a result of the earthquake. EQC's got responsibilities under the act, we want them to meet them".

Insurance law expert Dr Duncan Webb said that irrespective of the cause of the flooding, the city council was responsible for maintaining land drainage.

He said landowners did have a right to compensation from EQC where their land had been damaged and become more flood prone.

"There's two quite separate things going on," he said. "One is the prevention of the flood or the removal of the water through the drainage channels - that's the city council's obligation.

"The fact though, is that the land is worse land than it was. It has been damaged and the land damage is EQC's obligation".

That's something EQC announced on Tuesday that it wanted to have clarified in the High Court.

Dr Webb said if the court accepted a change in the land had increased flood risk, it must decide how to measure that damage and how to compensate for it.

"What EQC want clarified in court is whether what they've called increased flood vulnerability is land damage.

"It's pretty clear to me that it is.

"What they really want in the second part of that application is how they go about compensating and whether it's on a remediating basis or a loss of value basis.

Dr Webb said if the court accepted that a change in the land had increased flood risk, it must then decide how to measure that damage, and how to compensate for it.