A balloon which crashed near Carterton two years ago, killing all 11 aboard, would not have crashed if the wind had not changed direction, an expert says. 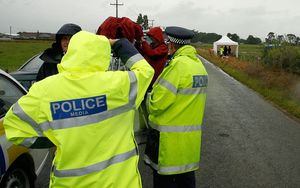 Policemen at the site of the crash near Carterton in 2012. Photo: AFP

British ballooning expert Phil Dunnington gave evidence by video link to an inquest into the January 2012 crash, in which all 11 people on board died.

Mr Dunnington said he understood the balloon was caught by the wind, causing it to veer towards the powerlines, and Mr Hopping would have had to make a judgment call on whether to put the balloon down immediately or try to climb over the wires.

It appeared Mr Hopping tried to free the balloon after hitting the lines but he would have had no options once arcing from the wire ignited the gas on board, he said.

"The intensity of the ensuing fire, exacerbated by the loss of the two exiting passengers and increased lift through uncontrolled heating, would have made any further attempts at survival futile, impossible."

The probable cause of the crash was the pilot not seeing the wires and not taking action, Mr Dunnington said.

Questions were raised at the inquest over cannabis use by pilot Lance Hopping.

Photographer Geoff Walker documented the journey and told the hearing his photos show Mr Hopping's eyes are perfectly clear, which would not have been the case if he had been smoking the drug before the flight.

He said from what he had seen in his photographs he believed the pilot Hopping would have been electrocuted by arcing caused when the balloon hit powerlines, leaving him no time to react.