A Marlborough farmer has been fined $15,000 for carrying a child on a work quad bike in what is believed to be the first prosecution of its kind. 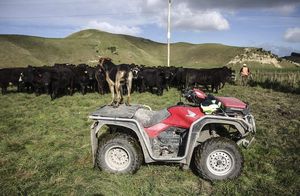 Herd manager Rangi Holmes was on Wednesday sentenced at the Nelson District Court on two charges under the Health and Safety in Employment Act, which prohibits the carrying of passengers on quad bikes used for work, and requires quad bike riders to wear helmets.

WorkSafe New Zealand inspectors said they saw Holmes riding a quad bike in the Rai Valley carrying his two-year-old child in front of him on the bike at least five times during a 20-month period from February 2012. Neither was wearing a helmet.

A warning notice was issued to his employer last August but Holmes was again spotted carrying the child a month later.

WorkSafe general manager of health and safety operations Ona de Rooy welcomed the fine and said it was the first time someone had been convicted for carrying a passenger on a work quad bike.

"This is a significant fine and it really reflects that his action was taken because there was significant risk," she said.

"There was the farmer's own life at risk and also the life of his children, and I think the fine reflects that."

There was no excuse for Holmes not to wear a helmet as they were supplied at his workplace, Ms de Rooy said.

WorkSafe last week said an average of five people a year were killed in quad bike accidents on farms, and a further 850 injured.

The farming sector needed to take more responsibility for the problem, it said.