The lawyer for New Zealander Leeza Ormsby, who has been held in Bali after a drug raid earlier this year, says his client could face more than a year in jail. 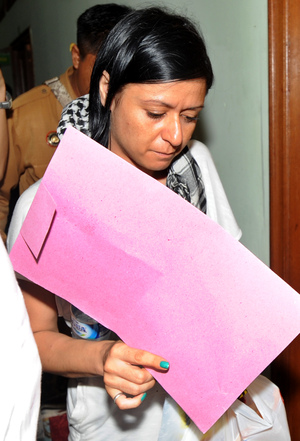 In February, the police raided the villa Ms Ormsby was staying in, finding party drug MDMA and hashish.

But her lawyer Ari Soenardi said she had only been charged in relation to the half-joint of cannabis she had on her.

Mr Soenardi said the drug laws in the country were amongst the toughest in Asia, and possession of cannabis was penalised seriously.

"At this moment, we're looking at one to twenty years - my expectation for the lightest sentence I can get can be somewhere between ten months to one-and-a-half [years]," he said.

He said Ms Ormsby's guilty plea would weigh in her favour.

"I hope the judge will see this as good faith on her side, so we can have a lighter sentence for that."

He said charges for the other drugs could be brought up in the future, but at the moment there was no evidence to support them.

"If you look at the history of this case, they already took three months, and to this day they cannot find any clues for my client, so I don't think it's going to be in my client's position again."

He said it now depended on whether the police could find any evidence for anyone in relation to the other drugs.

Mr Soenardi said Ms Ormsby still denied any knowledge of the other drugs found in the villa, and she could not remember whether she smoked the joint.

"That joint was given by a foreigner she met on the beach - she hardly knew that guy ... she didn't remember whether she inhaled or used the joint or not."

He said given the stress of the last three months, Ms Ormsby was glad the case was one step closer to being over.

"Emotionally she's fine, when I saw her this morning, she looks a little bit relieved," Mr Soenardi said.

"During these three months, it's like a lot of rumours, lots of accusations, lots of ambiguities - and so it was very stressful."

Australian reporter Gabrielle Dunlevy said Ms Ormsby would be formally informed of the charges during a court appearance which was expected next month.