A South Westland rescue crew has won a top award in the annual New Zealand Search and Rescue Council award ceremony at Parliament. 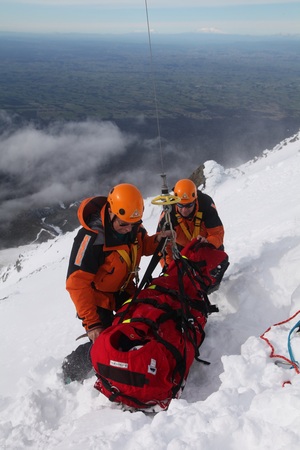 A search and rescue exdercise on Mt Taranaki. Photo: SUPPLIED

The gold award for 2013 went to four members of South Westland Alpine Cliff Rescue for saving a woman in March last year who slipped, fell and broke her arm and ankle, while attempting to climb Glacier Peak.

The climber said she landed in a crevasse on the Explorer Glacier and could have died if she stayed there the night.

Other awards went to Antarctica New Zealand and the United States Antarctic Programme for their response to an aircraft crash in Antarctica in January last year.

And the Whakatane Surf club was recognised for rescuing two divers in August.

The nominations for 2014 closed at the end of January.