Some North Otago residents say not enough is being done to stop an important road falling into the sea. 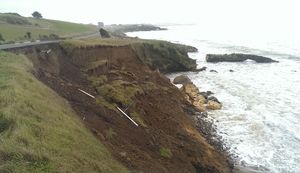 Beach Road was closed on Saturday after a major slip between Oamaru and Kakanui left the road close to the edge.

The area of the slip had not been considered prone to erosion.

Waitaki Council says it would like to move the road further inland but chair of the Coastal Erosion Community Group, Peter Amyes, says faster action is needed.

He says councillors have not made decisions fast enough, and in the meantime repair costs have gone up by 600 percent.

Mr Amyes says Beach Road is vital to tourism in the area.