A young forestry worker killed by a tree he had felled himself had only limited experience and was working unsupervised, an inquest has been told.

Rotorua coroner Wallace Bain has begun inquests into the deaths of Reece Reid, 23, and Robert Thompson, 43. 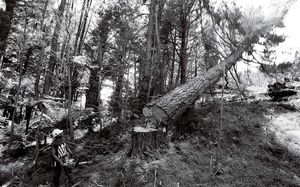 Mr Reid died in the Tararua district after a tree fell on him, while Mr Thompson died near Thames after being hit by a hook when a rope snapped.

Mr Reid had felled trees on only six occasions before he died, the inquest was told.

However, his supervisor, Mike Thomas, said he believed Mr Reid was past needing close one-on-one supervision.

Mr Clunie said he had given Mr Reid instructions not to start any felling if Mr Thomas was not with him.

Dr Bain said the number of forestry deaths in this country in recent years was alarming.

He was to inquire into the deaths of a total of eight forestry workers killed during 2012 and 2013 but six of the cases have been adjourned to allow for ongoing legal action.

Dr Bain said the forestry industry in New Zealand has the highest number of fatalities in any workplace and six times the number of accident compensation applications; 31 people died in forestry accidents between July 2007 and August 2013.

That is four times the number of forestry workers killed in Canada in the same period, a country which had 29,000 workers in the industry, compared to 4500 in New Zealand, he said.