Kim Dotcom will head back to the Supreme Court in June to fight a ruling that search warrants used to raid his house were legal. 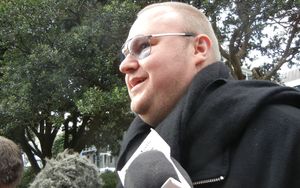 In February, the Court of Appeal overturned an earlier ruling that the warrants used in the 2012 raid were too broad and therefore unlawful.

The Court of Appeal found there was enough information accompanying the warrants to make it clear what the police were looking for.

Immediately after the decision, Mr Dotcom sought leave to appeal against that decision.

The Supreme Court on Monday released its ruling that the appeal can go ahead.

The new appeal is likely to force Mr Dotcom's extradition hearing, which is scheduled for June, to be postponed.