Internal Affairs Minister Peter Dunne will not order an inquiry into a fire at a Wellington storage facility.

Kiwi Self Storage in Kilbirnie caught fire on 4 April and the police have charged a man with arson. 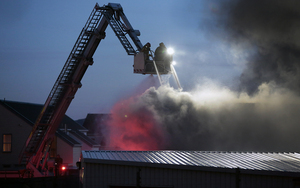 Rongotai MP Annette King wrote to Mr Dunne on behalf of people who rented units at the facility, asking for an urgent inquiry.

Mr Dunne has refused to order an inquiry saying it appears the building did meet the code, so the company is not at fault.

On Monday a group of people who leased units at the facility wrote to the company's directors, expressing their disappointment with their actions.

Spokesperson Peter Fowler said he believed they would have a case for legal action.

He said the company built the warehouse to the minimum standards, which made it easier for the fire to spread and destroy people's belongings.

Mr Fowler said the company breached its duty of care to its customers.