But that was a small proportion of the 19,237 marriages registered, the lowest number of marriages since 2001. 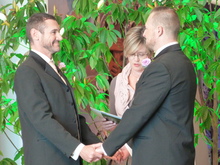 Paul McCarthy and Trent Kandler were among the first same-sex couples to wed. Photo: RNZ

About 40 percent of the same-sex marriages registered in New Zealand were couples from overseas.

Statistics New Zealand says 35 percent of the couples married in 1988 were divorced before their silver wedding anniversary.