A 120 kilogram, 2 metre tall brass statue has been stolen from central Wellington, close to the main police station. 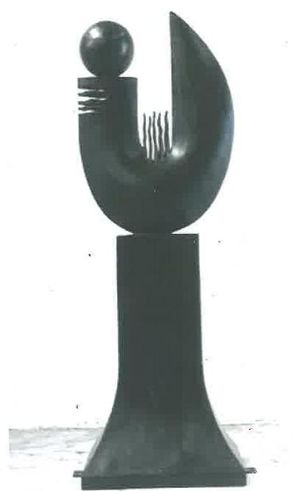 The statue, Soft Geometric Pacific Comb, was stolen from outside the Page Blackie Gallery on Victoria Street.

Police have revealed the the $65,000 statue was stolen in mid-March, but as they've been unable to trace it by speaking to art dealers and auction houses, they're now asking the public and scrap dealers for help.

However, it has not been returned and now the police are asking the public and scrap dealers for help.

Spokesperson from the Page Blackie Gallery said the statue is by sculptor Paul Dibble and it is an abstraction of a dancer and a Pacific shell comb.

Detective Constable Bryan Miller said the statue had security grills on either side and they need help from the public to find out who took it.

"It's really distinctive and obviously the size of it as well is unmissable so someone out there knows something about its location, and we'd be really keen on hearing from any member of the public or otherwise to have any information that leads to its return to the owner."

Mr Miller said police had reviewed CCTV footage and spoken to people in the arts industry, but had no leads at the moment.