The leader of New Zealand's contingent at Gallipoli for Anzac Day services says the trip has given the 34 young military people attending it a sense of empathy for what their forebears went through.

Mike Duncan says a historian has been with the young people chosen for the trip and explained to them what happened in 1915. 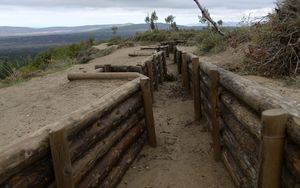 Colonel Duncan says the group is getting a first-hand experience of the environment in which the the Anzac soldiers landed.

Colonel Duncan says the choice of who would attend the commemoration on Friday was based on merit or on having a family member who served at Gallipoli or is buried there.

Corporal Fraser Clegg, of Wellington, who is taking part in joint drill exercises, says he feels humbled to be at site of the battlefield.

This year's commemorations will be a dress rehearsal for next year's centenary of the 1915 landings.

Final preparations are under way at Gallipoli for the Anzac Day services to be held there on Friday.

Military contingents from New Zealand and Australia have been practising to ensure everything goes as planned.

The Royal New Zealand Air Force Band's bugle player, Sarah Henderson, will be playing the Last Post at the dawn service at Anzac Cove and the New Zealand service at Chunuk Bair - and she admits to feeling nervous.