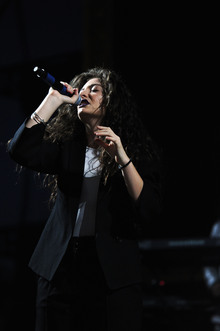 Lorde at a California music festival on Saturday. Photo: AFP

Teenager Ella Yelich-O'Connor, who uses her stage name Lorde, has been touring North and South America over the past few months and played at the Coachella Valley Music and Arts Festival over the Easter weekend, Reuters reports.

Lorde told her 1.5 million followers on Twitter she had a "nasty chest infection and general ill health".

She was due to kick off the seven-concert Australian leg of her world tour in Melbourne on Thursday.

"It breaks my heart to have to postpone these shows as the band and I absolutely love playing to Australian crowds, and it was not a decision we made lightly," Lorde said in a statement issued through her promoter, Frontier Touring.

"I know I need to focus on getting better in order to perform at my best. We'll be with you as soon as we can, Aussies," she said.

The teenager, whose breakthrough hit Royals was No.1 on music charts around the world in 2013, also won a Grammy for Song of the Year and Best Pop Solo Performance in January.