A land slip on Saturday shut down production at Macraes gold mine in Otago. 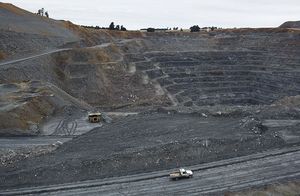 The company said a section of a wall failed after heavy rainfall. The wall was being continuously monitored.

The incident is being investigated by Worksafe New Zealand. No one was hurt.

No personnel were working in the open pit at the time.

Production is stopped because access to an underground mine was blocked by the rockfall.

But Oceana Gold, which runs Macraes, says the mine itself was unaffected.

The company said production will not be hampered much because the focus will go on stockpiled ore, not newly-dug material.

It added there was a similar incident a year ago.

Macraes is scheduled for closure in 2017 because of falling gold prices and there have already been redundancies at the mine.