Floodwaters are beginning to recede across the South Island after torrential rain on Friday. But many roads remain closed by flooding, slips and fallen trees and some people in Greymouth are spending another night in evacuation centres.

The remnants of Cyclone Ita have been lashing much of New Zealand since Thursday, cutting power, damaging buildings and disrupting transport as the Easter holiday begins. The MetService said heavy rainfall in the Tasman District is expected to ease overnight, while rain warnings for other South Island regions have been cancelled.

If you witnessed the storm and would like to share pictures or video with us, please email it to: iwitness@radionz.co.nz 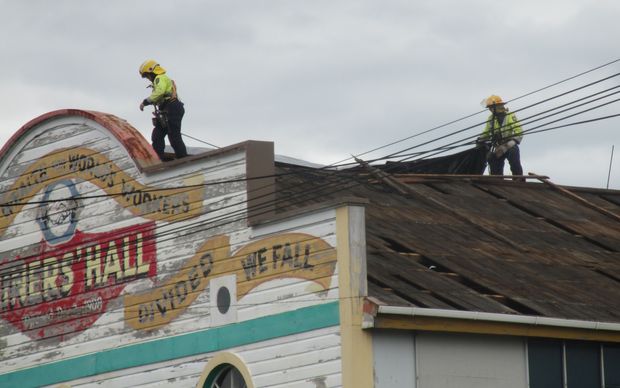 The storm lifted the roof on the Runanga Miners' Hall in Greymouth. Photo: Paul Kearns

In Greymouth, nearly 40 homes and buildings have been left uninhabitable after high winds through the West Coast, causing the central business district to be closed off.

Grey District Civil Defence controller Steven May said it's an Easter weekend people are unlikely to forget. He said the severe weather have kept emergency services flat out since Thursday and most of the seriously damaged buildings have been wrecked by wind.

Grey District mayor Tony Kokshoorn said homes are without roofs, aircraft and hangars have been destroyed at Greymouth Airport, and the Blaketown hall has been flattened.

Mr Tony Kokshoorn says about six people were expected to spend a second night in an evacuation centre after their homes were damaged by gale-force winds.

"A magnificent effort from the volunteer firefighters and the public got together today and put tarpaulins on probably 60 houses that had no roofs. We have gone around from a safety point of view and we've demolished some of the big buildings that needed to come down that could pose a safety issue if the winds come up again."

Anyone needing shelter should go to the Red Cross centre at the Baptist Church on High Street. Mr Kokshoorn says there is heavy rain forecast for parts of the West Coast on Friday night, but it is not expected to cause major problems.

West Coast District Health Board said services are operating as normal at Grey Base Hospital but there are problems at Buller Health and at facilities in Ngakawau and Karamea. No one has been injured, but the storm has caused power cuts and road closures from Franz Josef to Haast and Whataroa.

Near Oamaru, a farmer had to drive his 14-tonne digger into a flooded river to rescue a woman trapped on the roof of her car. Robert Borst said he arrived at Kakanui River just before midday on Friday and saw the vehicle with only the very tops of its windows above water.

Mr Borst said police tried to reach the woman with a helicopter but were prevented by overhead powerlines. He then volunteered to drive his digger into the river with an officer in the bucket.

He said the water was fairly deep and flowing fast. "At times, it was in around my feet in the cab and when we went through some of the faster running parts it was certainly lapping up over the engine, that was for sure. I managed to get close enough to reach out with a bucket with the rescue man and we managed to pluck her off the roof."

Mr Borst said the woman was suffering from hypothermia and shock.

Meanwhile, about 50 motorists stranded on State Highway 1 between Kaikoura and Blenheim for hours on Friday have been freed after workers managed to clear parts of the road.

The state highway had been cut by flooding and slips and by Friday evening was down to one lane. Sergeant Jim Curry said police are asking drivers to take extreme care. 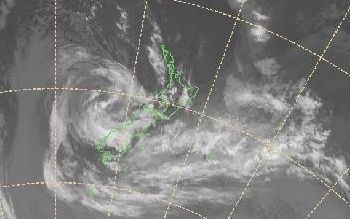 The country has been battered by the tailend of a cyclone. Photo: MET SERVICE

Heavy rainfall in the Tasman District is expected to ease by Saturday morning. Civil Defence Tasman District group controller Jim Frater said rivers in the area have reached peak flows and are now receding, except for the Motueka River which was still rising late on Friday night.

Mr Frater said that would mean a small community at Peach Island would be completely isolated and residents were being contacted and told to sit tight. "We are not anticipating with the rain that's coming through that they have any cause for alarm."

Nelson Hospital is now running normally again after the intensive care unit was evacuated earlier on Friday when a large sheet of roofing hit the building.

The MetService has lifted heavy rain warnings for Dunedin, North Otago and Canterbury, but many rivers will run high for several days.

North Otago had 80mm of rain since 10pm on Thursday and was expecting another 100mm on Friday. Dunedin was expected to get a further 40mm to 60mm.

The Christchurch City Council said the rain appears to have peaked, but flooding and slips have closed roads across the city, while broken water pipes have left parts of Lyttelton without a water supply. Fifteen streets in the port are affected and the council is providing water from a tanker in London Street.

The council said 65mm of rain fell overnight on Friday in the city and 180mm in Akaroa. It remains cut off by several slips on State Highway 75 and there is no estimate on how long it might take to clear.

Regional flights were disrupted on Friday. Christchurch Airport said arrivals from smaller centres have been delayed or cancelled.

Some areas still without power

More than 2000 homes in the North Island are still without power after severe winds damaged many power lines on Thursday night. The Central North Island and Bay of Plenty are still the worst affected, with 1500 customers yet to get their power back.

In the Far North, about 180 customers still have no electricity, while all customers have been reconnected in Northland.

In Hawke's Bay and Rototura, only small pockets of the region don't have power, with electricity provider Unison saying about 30 customers are still to be connected.

On the West Coast, less than 1000 customers are expected to remain without power.

Powerco acting operations manager Phil Marsh said many outages could have been avoided if people had kept their trees better trimmed.

KiwiRail said line maintenance crews would be clearing slips from the line between Picton and Kaikoura on Friday.

Passengers on the Coastal Pacific train en route to Christchurch spent the night in Kaikoura and may have to stay a little longer because there's no indication yet when the line will be clear. Also in the South Island, the Main North Line, Midland Line and Stillwater-Ngakawau Line remain closed because of slips and flooding. 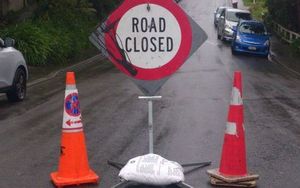 Several roads throughout the country are impassable. The main road between Tauranga and Taupo is closed because of slips on Friday.

The New Zealand Transport Agency said flooding has closed the road between Featherston and Martinborough in southern Wairarapa; a slip is blocking both lanes of the Mangorewa Gorge road in Bay of Plenty; and a slip also closed State Highway 36 north of Lake Rotorua.

Police said State Highway 1 at Kaikoura is open, although driving is extremely hazardous with slips, flooding and the wind whipping up sea spray across the road.