Civil Defence staff in Greymouth will remain on standby overnight as more West Coast residents are expected to be forced from their homes following a major storm that has battered much of the country.

The remnants of Cyclone Ita lashed much of the country on Thursday, cutting power, causing damage and disrupting transport ahead of the Easter holiday. People in stormy areas around the country are warned to stay inside and keep themselves and their children away from any fallen lines, as they could be live and dangerous. 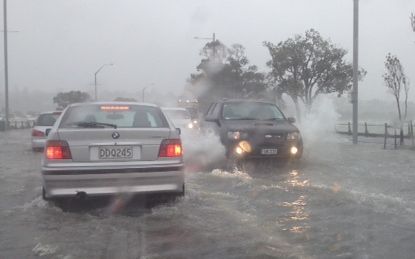 Tamaki Drive in Auckland was closed because of flooding. Photo: RNZ / Lisa Thompson

Twenty-seven people have sought refuge at welfare centres at the Baptist Church and at Cobden School in Greymouth after houses lost their roofs and windows were smashed in gale-force winds.

Civil Defence emergency manager Allan Wilson said those who have been evacuated are in motels for the night, but staff are expecting more residents to call for help and have enlisted the Fire Service and police's help. Civil Defence would help those affected find more permanent accommodation in the morning.

Mr Wilson warned the coastal town's CBD is still a very dangerous place to be after roofing iron blew off buildings and remains off-limits due to safety concerns. "It's very dangerous to be out and about. One of our vehicles was significantly damaged - it was hit by a flying piece of iron with a big bit of timber still attached to it."

The general manager of Grey Westland Health Services said the Buller and Grey hospitals are operating on generator power, but seem to be coping well. Mark Newsome said the Kynnersley Aged Residential Care facility in Buller is operating on limited power while it awaits a diesel generator to be transported from Westport.

Many parts of State Highway 6 which runs the length of the West Coast would remain closed overnight because of strong winds, flooding and downed trees and power lines. These include Westport to Punakaiki, Greymouth to Runanga and Ross to Haast. Bridges connecting the suburb of Cobden to Greymouth are closed, leaving some people stranded.

Several drivers were trapped by fallen trees and power lines where high winds of up to 160km/h cut power to the entire Buller district and parts of Westland. By 10pm on Thursday 500 customers were without power.

Motorists on the West Coast should exercise extreme caution if they must go out. Extra care is also being advised on the Desert Road, in the central North Island, where strong winds are making life difficult for motorcyclists, caravans and high-sided vehicles.

More than 12,000 homes are still without power in the North Island on Thursday night, including Manawatu, Taranaki, Wairarapa and Wanganui, Bay of Plenty, Waikato and South Waikato.

Auckland's Civil Defence emergency coordination centre was stood down after the storm swept through the region on Thursday morning with gusts up to 100km/h recorded.

Some 25,000 homes and businesses lost power at some stage, but by 10pm on Thursday night

2800 were without. There were 350 Fire Service callouts, including one to deal with a trampoline that landed 30 metres up a tree. Work is continuing to clear debris and fallen trees from roads in the region.

A major road, Tamaki Drive, was closed for several hours, with water up to waist height in some places and the council warned the high tide combined with heavy rain was making some coastal areas treacherous.

About 30 flights in and out of Auckland Airport were delayed because of the weather. Some schools were also affected.

About 1000 Far North households will be without power on Thursday night and are likely to include Kawakawa, Mangonui, Kerikeri Inlet, South Hokianga, Awarua and Paihia.

Top Energy said damage to the network caused by the storm is extensive. Repair crews have been working since daybreak fixing faults and most would be stood down until early on Friday for fatigue and safety reasons. Power lines have been on the ground in many places and are potentially lethal.

A number of popular holiday routes on the Coromandel Peninsular are closed because of the storm, delaying Easter holiday traffic. Flooding has closed the road to Tairua and Pauanui and between Thames and Coromandel town. The road through the Karangaheke Gorge is marginal.

As the storm moved south, about 1200 customers lost power in Waikato, mainly due to high winds bringing debris down on lines. By 5pm, about 250 customers were without power. 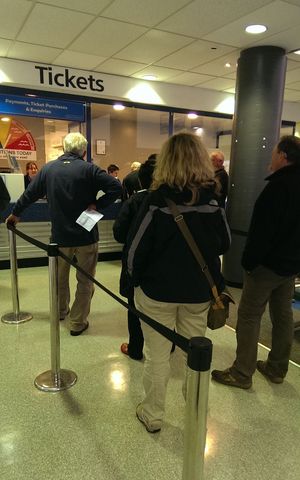 In Rotorua, 759 houses are without power due to winds knocking trees onto powerlines. Unison Networks spokesperson Danny Gough said these homes are likely to be without electricity until sometime on Friday morning. Flights at Rotorua Airport were disrupted on Thursday.

Severe winds and high seas caused trouble for Cook Strait ferries. Interislander cancelled at least two crossings between Wellington and Picton on Thursday evening and delays of up to two-and-a-half hours are in place for other services. The company said it is contacting those affected directly and up-to-date information is up on its website.

Several slips were reported in Wellington on Thursday morning after 24 hours of heavy rain and MetService is warning of more to come.

Occupants were forced from two properties in Oriental Bay on Wednesday night because of a mudslide and Earthquake Commission workers have been at the site. 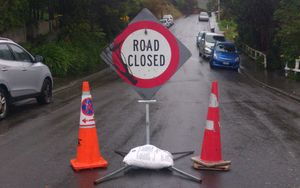 In the suburb of Karori, a landslide brought down trees on Nottingham Street and reached the footpath on the other side of the road. The slip broke a gas line, which has since been fixed. There was also a minor slip in Salamanca Road in the suburb of Kelburn and a small rock fall on the Rimutaka Hill Road, both of which have been cleared away.

Dozens of slips have made State Highway 1 dangerous between Kaikoura and Picton on Thursday night. Twenty-four slips and partial road blockages have been reported following heavy rain. Motorists are being urged not to travel unless absolutely necessary.

Port Underwood Road from Whatamongo to Haka Haka has been closed due to a large slip which has also brought down trees. Rock falls and flooding are causing problems on the state highway south of Ward. Sewage is overflowing into the waterways in Picton and people are being urged to stay clear.

Passengers on the Coastal Pacific train from Picton to Christchurch will spend the night in Kaikoura because of slips and flooding affecting the rail tracks. KiwiRail said the slips will be inspected at first light on Friday, but further disruptions to rail services are possible.

The Nelson Tasman region was also battered by the bad weather, with Waimea Road - the main route in and out of Nelson - blocked by a fallen tree on Thursday. Trees have also come down in The Brook and Stoke, causing increased traffic chaos as people attempt to set out for the Easter holidays.

Power is out in parts of Richmond and Stoke, and at about 1800 properties in Golden Bay on Thursday night. The Tasman District Council says people should stay indoors if possible.