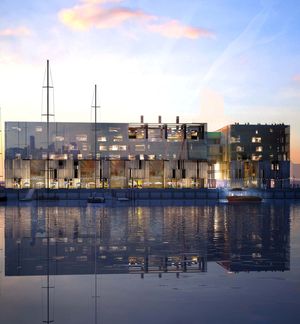 The 200-room hotel would be built on the western edge of Viaduct Harbour. Photo: SUPPLIED

A privately-owned luxury hotel is to be built in an area Auckland ratepayers have spent hundreds of millions of dollars improving.

The five-star, 200-room hotel is planned for the Wynyard Quarter on the waterfront.

Beijing-based developer Fu Wah International will spend $200 million building the hotel, and will also pay a one-off lump sum as a lease when construction starts next year.

Auckland Council has spent hundreds of millions improving the waterfront to make it attractive to investors, and the Tourism Industry Association says that's concerning.

"The fact that no hotel has ever been built there, and they've been trying for two to three years to get someone, shows that it actually doesn't stack up as a commercial proposition without some sort of public funding. But yet the council were persevering to try and get that there anyway."

But Waterfront Auckland chief executive John Dalzell said such sites have been made available to both national and international investors.

"The sites have been keenly sought after and a contestable process has spanned a considerable period of time," he said.