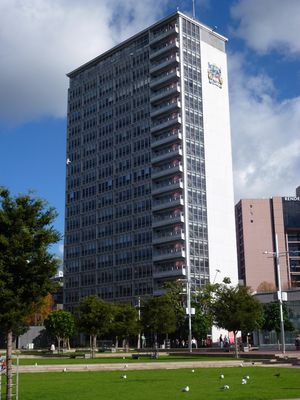 The Civic Administration Building is too small for the merged Auckland Council. Photo: RNZ / Todd Niall

The future of a building once considered a central Auckland landmark is uncertain as Auckland Council considers demolishing its 1960s-era Civic Administration Building.

The council is moving out of the Aotea Square building this year and says asbestos and structural problems mean it could cost $70 million to refurbish a building that it no longer needs.

Heritage advocates oppose demolition, describing the building as nationally significant and one of a declining number of examples of modernism.

Auckland councillors will on Wednesday consider a two-pronged process to seek a private buyer, and to re-design the corner of Aotea Square which the building occupies.

The 16-storey building was the country's tallest at the time it was designed in the mid-1950s, and it towered over the central city when the Auckland City Council opened it in 1966.

It was designed by the council's then chief architect, Hungarian-born Tibor Donner, who toured the world with engineers studying similar high rises before settling on the Civic's look.

Julia Gatley, a senior lecturer at the school of architecture and planning at the University of Auckland, said the narrow, height-enhancing look was quite different to other high-rises of the period.

Dr Gatley chairs the New Zealand branch of international modernist group Docomomo and said the Civic was one of 20 submitted as this country's prime examples of the era.

She believed the council had a responsibility to retain it and find a new use for it.

"It's not just about market forces dictating the future of the building, it's also about the council saying we have important heritage resources and this is how we can look after them," Dr Gatley said. 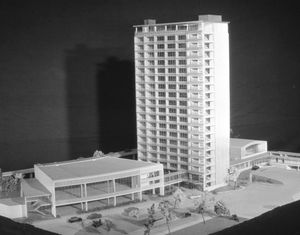 The original 1956 model of the Civic Administration Building design.The annexes on either side were never built. Photo: Auckland Libraries

The council report being considered on Wednesday says the civic administration building will require significant work, including asbestos removal, strengthening of its steel frame and new cladding.

It says two unofficial assessments give it the highest heritage rating of Category A, though staff believe it justifies a lower rating and warn a formal A classification might prevent demolition.

The council is in the process of moving staff from several buildings into its new headquarters in Albert Street, which it bought for $104 million. It will house 2400 staff, instead of the 500 in the current head office.

The Civic sits on a site previously known as Auckland's Chinatown, where the council progressively bought rundown low-rise buildings to create the civic centre next to the Town Hall.