The developers of a 27-storey luxury hotel on Dunedin's waterfront have dumped the plan, blaming the city council for holding up the project too long.

Dunedin City council last month signed a memorandum of understanding with Betterways Advisory Limited to try to rescue the plans for the $100 million hotel and apartment complex. 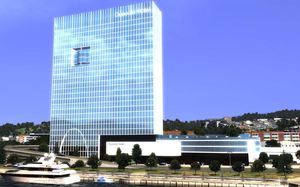 An artist's impression of the waterfront hotel. Photo: SUPPLIED

The hotel project was bold from the start, the design startling Dunedin with a glass tower that would stand twice the size of any existing building in the city.

The parties would attempt to sort out traffic problems and then, if successful, move on to the more controversial issues of the building's height and design.

On Monday the developers walked away from the plan, after sending an ultimatum to council which they say it did not meet.

Betterways director Jing Song said the memorandum set a deadline of 21 March to try to get agreement between the council's and developers' traffic engineers but the council has not delivered.

Ms Song, a 27-year-old Otago University graduate, said the millions of dollars she had spent were wasted, and it seemed the council never really wanted the hotel.

Dunedin mayor Dave Cull rejected that view and said the council was working as fast as it could in good faith and assumed the developers were too.

The council had given Ms Song's company a full rundown on the process whenever it asked, he said, and again on Monday.

Mr Cull said the agreement seems to have been ended on a pretext, which is a matter for regret, but he always had doubts the traffic problems could be fixed. However he had worked hard to put the hotel plan back on track after resource consent was rejected.

The council has been talking to other developers about building Dunedin's first five-star hotel on different sites, Mr Cull said, and some of those are more likely to succeed.