The Accident Compensation Corporation admits it may owe people thousands of dollars for cutting their compensation when they refused to sign a privacy waiver that courts have ruled unlawful.

On Tuesday, ACC reinstated one person it had cut off twice, and is looking back over 14 years for of others it penalised over the controversial 167 consent form. 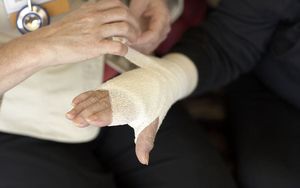 Once a person signs the 167 waiver, ACC had the right to collect, use and disclose their information to an undefined list of "external agencies" and service providers.

However on Monday, the Dunedin District Court ruled that's too broad and beyond the law, and ACC had no right to decline entitlements simply because a client wouldn't sign the form.

In Parliament on Tuesday afternoon, ACC Minister Judith Collins told MPs she spoke to the corporation about the court rulings on Monday.

"They should look at the issue more broadly, and it appeared to me as a lawyer that the current form needed fundamental review. I'm assured ACC is revising these forms to address the matters raised by the court and that they are now also including my recommendation to look at the wider implications of the form."

Claimants complained about the broadness of 167 to an independent review of ACC in 2012, triggered by mass privacy breaches.

The KPMG review recommended that the corporation make its forms and consent processes as specific as possible to a claimant's circumstances, and ACC promised to do that. But 18 months later, it is still using the 167 form.

ACC's general manager of claims management Sid Miller told Radio New Zealand's Checkpoint programme on Tuesday the the corporation doesn't know how many people are affected, but agrees they could owe people considerable sums of money.

He said the corporation has implemented 37 of the report's 44 recommendations. "We're working through all those recommendations and all those findings. There is a considerable amount of work to do in there and we're continuing to do that, to meet our commitment."

Mr Miller said staff are looking back over 14 years worth of data and have set up an 0800 number for people to call. Mr Miller says 13 people have phoned on Tuesday one of whom withdrew permission for the waiver.

A disabled man whose accident compensation was cut off twice in a dispute over the privacy waiver form was told on Tuesday that he has been reinstated.

Peter de Waal has been battling ACC since 2009 when his compensation was stopped - it was reinstated after court case in 2012 , then cut off again in March this year. Mr de Waal told Checkpoint he now wants an explanation.

"I'll be writing a letter to my case manager wanting first of all, this explanation under the Official Information Act, which they promised me regarding the alternative arrangement clause. Secondly, I'll be asking for an explanation of this entire episode. I mean, why is it they've done these things, why was I cut off, why am I reinstated."

ACC says it will change the 167 form within the next fortnight.

The woman whose complaint about a consent form prompted the Dunedin court ruling says she first raised concerns about ACC five years ago.

Denise Powell repeatedly refused to sign the form and first voiced her misgivings with ACC in 2009, as part of her involvement with a consumer advocacy group. Dr Powell, from support group Acclaim Otago, took the case to court.

A long-term claimant, who has name suppression, refused to sign the form in 2010 and had his entitlement suspended.

"In my opinion they (ACC) had absolutely no right to ask for a copy of everything that the GP had on me, even though I had nothing to hide, it's just an abuse of privacy and power."

Christchurch privacy lawyer Kathryn Dalziel told Radio New Zealand's Nine to Noon programme on Tuesday that claimants should question the corporation about what it has done with their information and may have a privacy complaint.

Lawyer Hazel Armstrong said the form has been an area of contention for several years and people who have had their entitlements refused should now seek advice.

Ms Armstrong, who represents ACC claimants, said the corporation has been too heavy handed. "They require claimants who have been injured and who are seeking entitlement to sign the ACC 167, and if you don't, they will suspend your entitlement, and it is quite harsh when you're a claimant to get this kind of approach."

Accident compensation legal specialist John Miller said people signing the form should make sure to be clear what they are agreeing to.

"If they get a consent form from ACC and it's not particular enough, (they) should specify on it, say 'this is limited to my broken leg' ... and just try and be as precise as possible what you're giving consent to," he said.

Meanwhile, Denise Powell believes the corporation may now take a cautious approach. "They will need to look very closely at how they go about obtaining consent for collection of medical records and any other information that they are actually wishing to obtain."