The developer of a multimillion-dollar subdivision near Marsden Point says sinkholes appearing in its roads are the result of faulty underground pipes approved by the Whangarei District Council.

Two sections of road in the new Marsden City development have slumped, raising fears of failing infrastructure and big repair bills for ratepayers. 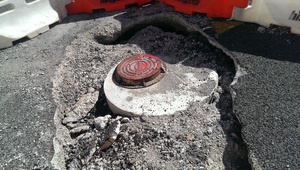 However, developer Oliver Scott believes the damage will be limited. He says the problem is that pipes are cracking underground, absorbing the sand embedded around them and creating a void that causes the surface to slump.

Mr Scott says the council had a role to play in the situation. He says his contractors rejected a number of concrete pipes because they appeared poorly cured and liable to crack, but they were over-ruled by suppliers and the council's consultants, and the pipes were used.

The Whangarei District Council says its lawyers are looking into the question of liability.

Infrastructure manager Simon Weston says the council signed off on the Marsden subdivision works and is responsible for repairing the holes. However, the question of who pays for the repairs hinges on what is causing the problem.

Mr Weston says the council will excavate the manhole and pipes in the newest sinkhole after Easter to get a better idea of what has happened.

The 90-hectare Marsden City development is still largely vacant, although the first show homes are going up in April.

Critics of the project say the land was unsuitable for building because it is low-lying and the developers had to remove thousands of tonnes of peat from the site.

However, the developers say the site is 10 to 12 metres above sea level and the land is very stable with a sandstone hardpan.