One of the authors of a new report on climate change, which shows greenhouse gases have risen to record levels, says New Zealand is not doing its share.

The latest report from the United Nations' Intergovernmental Panel on Climate Change (IPCC) has found global emissions have grown far faster between 2000 and 2010 than in the previous 30 years and attempts to rein them in are failing. 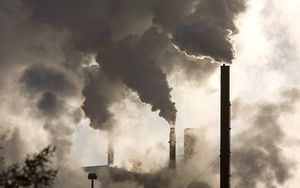 Figures from the Ministry for the Environment show New Zealand's greenhouse gas emissions rose by 25 percent between 1990 and 2012.

"We've got a small token gesture to reduce our emissions by 5 percent by 2020, other countries in the world are reducing the 10, 20, 30 percent by 2020. No policies in New Zealand are encouraging anybody to reduce emissions."

Associate Professor James Renwick, a climate scientist from Victoria University, believes the Government's targets for reducing emissions are high, but says it is unclear how it will meet them.

"We would need some serious investment and some serious policy signals around moving away from fossil fuels and investing in clean energy technologies and as far as I can see that just isn't happening," he says.

Professor Renwick says with this country's wealth of renewable energy sources, New Zealand has the opportunity to be a world leader in becoming carbon neutral.

Green Party MP Kennedy Graham says the Government is not doing enough to combat climate change. He told Morning Report the UN statistics since 1990 show both New Zealand's net emissions and gross emissions have soared and are predicted to increase "massively" up until 2030 or 2040.

The IPCC report says the world needs to cut fossil fuel use by 40 to 70 percent by mid century, to keep global temperature rises to the 2 degrees that has been agreed to by governments.

Sustainability Council executive director Simon Terry says New Zealand is not doing nearly enough to achieve that. He says if New Zealand really wants to cut greenhouse gas emissions it should budget for them just as carefully as it budgets for money in its annual accounts.

Minister for Climate Change Issues Tim Groser says what New Zealand does to curb greenhouse gas emissions is irrelevant unless it is part of a global action, and the report proves that a worldwide deal is vital.

Mr Groser believes New Zealand is on the right track in pressing for a binding international agreement on emissions beyond 2020. He says the agreement should be flexible, catering for countries' individual circumstances and allowing them to play to their strengths.

The minister says more than 100 countries responsible for 22 percent of global emissions have said they're not going to do anything to cut emissions. He says it's not worth New Zealand doing more to curb emissions unless big polluters such as China and the United States are doing the same.

Mr Groser also praises the agricultural sector, which is often blamed for its large contribution to greenhouse gases. Mr Groser says the value of agriculture is up by 48 percent since 1990, while emissions only went up by 12 percent.

The IPCC report found without additional efforts the world is on course for a global temperature increase of 3.7 - 4.8 degrees by 2100.

The IPCC report comes just three days after the Government announced it had emerged from the Kyoto Protocol unscathed.

That is because increased greenhouse gas emissions from 1990 to 2012 were more than offset by tree planting.

He says many trees will be cut down and not replanted, and could as a result become a source of carbon and not a carbon sink.