People opposed to seabed mining off the North Island west coast say if an application to mine is successful it will open a flood gate of applications which will destroy the marine environment. 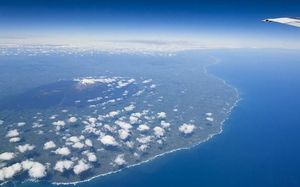 Trans Tasman Resources wants to mine iron sands off the coast of Taranaki. Photo: PHOTO NZ

The Environmental Protection Authority is hearing a request from Trans Tasman Resources (TTR) to mine a 65-square kilometre area in the South Taranaki Bight, 22km off shore.

It wants to do this over 20years, a total of one billion tonnes of sand.

Kiwis Against Seabed Mining is leading the fight against the proposal. Chairperson Phil McCabe says the ecological effects would be massive.

He takes issue with an assertion by TTR that there would only be small effects on the coastal environment.

"The science we are relying on to make this decision is not providing a level of certainty that makes us feel comfortable."

Mr McCabe's daughter, Sequoia, aged 12, made an heartfelt appeal to the five members of the EPA decision-making committee in Hamilton on Thursday.

"I know deep in my heart that the scene I awake to every morning may never be the same again because it seems no one really knows what affect the mining will have on the environment".

Bernadette Gavin from Raglan says speaking out against seabed mining is possibly one of the most important things she will ever do.

Hapu along the west coast from Port Waikato in the north to Mokau in the south have joined forces in opposing the extraction of sand from the seabed.

Her big concern is that if TTR get the green light for what is currently a fairly small area of ocean, the rest of the west coast will be up for grabs.

"We are really concerned that there are a whole lot of companies lined up to exploit and extract from this zone."

The EPA finishes its week long hearing in Hamilton on Friday before moving to Wellington next week and then on to Taranaki and Whanganui.