Toyota says the recall of 40,000 vehicles in New Zealand is precautionary, not because of faults that have caused serious injury.

Some 6.4 million vehicles worldwide are being recalled because of problems in almost 30 models. 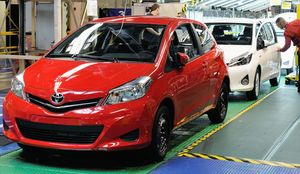 Toyota New Zealand says those affected include the RAV4, Prado, Hilux, Yaris, Ractis and other import models built between 2004 and 2013. The company says the faults are minor but it wants to act proactively to make sure no one is hurt.

One problem is a potentially faulty cable that could stop the airbag being deployed; another is defective seat rails, which could break and mean a seat slides forward in a crash.

"Obviously to us the safety of our owners is paramount. We're trying to be as responsible as possible. Yes, if a part fails on a car there's always a slim chance that something serious might go wrong. We just want to make sure that we preclude the possibility of that happening."

The editor of the Dog and Lemon car guide, Clive Matthew-Wilson, has accused the company of compromising on quality in order to keep costs down.

But Mr Morris says that view is overly simplistic, telling Morning Report the company did make mistakes when it grew quickly but the faults are very small and the recall is precautionary.

The Automobile Association says car owners shouldn't panic over the big recall . Motoring advice manager Andrew Bayliss says the faults are minor and unlikely to be putting people at risk.

Motor Industry Association chief executive David Crawford says the owners of the affected models could be hard to find, with vehicles likely to have changed hands maybe two or three times.

"We have other processes in place where we can get hold of the current owners but it's a little bit more complicated because it depends on whether they come in for a warrant of fitness or not and whether we can work through that system."

Consumer New Zealand says the Toyota recall is a blow for the company's reputation of reliability. Research and testing manager Hamish Wilson said Toyota has a reputation has a very reliable brand and the recall could seriously affect that.

Mr Wilson said the company seems to be handling the recall well and has offered to replace any affected parts. Car owners who think they may be affected should check Toyota's website and then get in touch with their nearest dealer.