A plea has gone out to the Government to give New Zealand Land Wars battles the official status and recognition given to wars fought overseas.

A Waikato-Tainui leader, Tukoroirangi Morgan, issued the call at the 150th anniversary commemoration of the Battle of Orakau in Waikato on Tuesday.

He says New Zealanders know very little about the history of wars fought in their own country and there needs to be a public holiday each year to commemorate the Land Wars and the sacrifices made by both sides.

Mr Morgan is also asking the Government to buy the site of the Battle of Orakau, near Kihikihi, which is in private hands.

The1864 battle involved 300 Maori up against a force of 1100 British and colonial troops. After three days of fighting, all Maori fled the pa. It is estimated up to two-thirds escaped.

Tuesday's ceremony is being attended by Governor-General Sir Jerry Mateparae, the Maori King and other dignitaries. 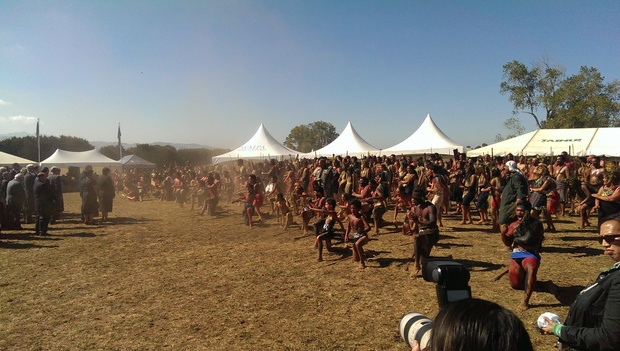 Powhiri for the official party at the battle site on Tuesday. Photo: RNZ / ANDREW McRAE