The biggest change to the Family Court since it was established 33 years ago takes effect from Monday and its caseload is expected to reduce significantly.

The Government has introduced a dispute resolution service, enabling people in non-urgent or non-violent cases to access mediation instead of going before a judge.

In 2011, a review of the courts found far too many people went to the court unnecessarily and cases were taking too long to resolve. The change is aimed at getting people to resolve their differences out of court, with minimum stress on the children. 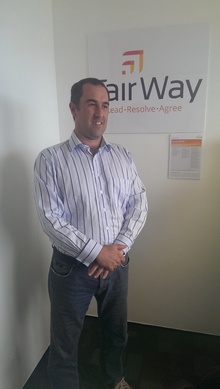 Greg Pollock: mediation puts the onus back on the individuals themselves. Photo: RNZ / JONATHAN MITCHELL

More than 20,000 cases go through the Family Court each year, and Justice Minister Judith Collins says that under the new regime she expects the caseload will reduce significantly. "Around 40 percent is the estimate that Justice has given me of the cases that will be able to be resolved through mediation," she says.

Ms Collins says the changes are not retrospective, so only new cases will be referred for mediation.

The chair of the Law Society's family law section, Garry Collin, is sounding a note of caution about the reforms.

"A lawyer can be certainly working in the background if needed, might be able to go to mediation if the mediator agrees," he says, "but there might be certain court processes where they cannot attend by legislation and that is probably quite unique within family law."

Labour Party justice spokesperson Andrew Little says cases might drag on because of the absence of lawyers.

"There will be some people that will say 'I don't know what the legal effect is of what I'm being asked to agree to here and I'm not going to agree', or 'I've been on the phone to my lawyer because I can afford it and this suits me and I want the agreement', and I think it is going to create more problems than it fixes at the moment."

FairWay Resolution is one company that will be providing mediation services, and its chief executive, Greg Pollock, says mediation puts the onus back on the individuals.

"It allows them to focus on reaching agreement themselves," he says, "rather than the agreement being imposed on them by a court."

Ms Collins says not all cases will go to mediation: those involving violence or that are regarded as urgent because a child's safety is at risk will still go to court.

For more information on this story, go to: http://www.justice.govt.nz/family-justice