The Government says its partial asset sales programme is a success after announcing shares in Genesis Energy were going on sale for $1.55 each. 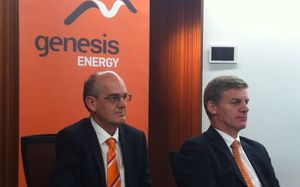 But Opposition parties say the programme has failed and the Government has not got as much money from the sales as it promised.

The Government on Friday announced the final details of the partial sale of Genesis, which it expects will raise $736 million.

About 400 million shares have been set aside for institutional investors and sharebrokers, while another 90 million go on general sale from midnight on Friday.

State-Owned Enterprises Minister Tony Ryall said on all counts the sale of shares in Genesis, Meridian Energy, Mighty River Power and Air New Zealand has been a success.

"The Government will raise an expected $4.7 billion in proceeds from the four share offers. This is within the Treasury's latest estimate of between $4.6 and $5 billion across the entire programme, following the withdrawal of Solid Energy."

But both the Labour and Green parties say the sales proceeds have fallen short of Government promises.

Labour's state-owned enterprises spokesperson, Clayton Cosgrove, said this is yet another fire sale.

"What this means is that the Government's promise to raise between $5 and $7 billion from the total asset sales programme was a lie. And what they've got is they've got under $5 billion."

Greens co-leader Russel Norman said the asset sales programme has not raised as much as the Government predicted it would. "This is a failed programe from one end to the other, it's failed on every one of the criteria that the National Party put forward."

Mr Ryall said the money raised from the sales will be invested in schools, hospitals and ultra-fast broadband.

Finance Minister Bill English said to encourage New Zealand participation, people who hold onto their Genesis shares for 12 months will get one loyalty bonus share for every 15 shares they own, up to a maximum of 2000 bonus shares.

Mr English is confident New Zealanders will be at the front of the queue, saying Genesis is expected to be 88 percent New Zealand-owned once the sale has been completed.