Blues halfback Piri Weepu is expected to be able to resume his rugby career, despite suffering a minor stroke.

After complaining of migraine-like symptoms for the past few weeks, the former All Black had an MRI scan on Monday. 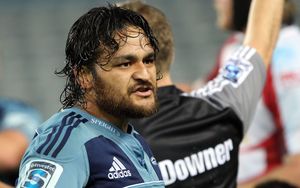 Piri Weepu during a Super 15 rugby match between the Blues and Lions at Eden Park in May 2012. Photo: AFP (file)

Blues doctor Stephen Kara said on Thursday that the player will have more tests to determine the cause of the stroke, which appears to have occurred before the team travelled to South Africa earlier in March. Weepu went on to play three more games before the diagnosis.

However, Dr Kara says Weepu's problem did not come from any concussive event or blow, and is instead possibly a not-uncommon clot resulting from a heart problem, which is why it didn't show up on initial tests.

He says a stroke would have been one of the medical team's first thoughts had Weepu been a much older man, but as a healthy 30-year-old athlete and due to the small, subtle area of the relevant scan, it wasn't immediately obvious until the more detailed MRI scan.

Dr Kara says Weepu's long-term playing future looks pretty good and he is expected to make a full recovery, though he won't be taking the field for at least a month.

The results of further scans won't be known until at least Friday, but it is thought Weepu's heart may have been responsible for causing a clot on his brain. If that is the case, Weepu will be put on some long-term heart-thinning medication which will still allow him to safely play rugby.

Should the heart scan show a defect in the heart, such as a small hole - which Dr Kara says is quite common in such cases - then Weepu will undergo surgery to correct that.

"We're all pretty shocked, pretty devastating for us all. Piri, the man that he is, wanted to tell the team ... He's been in hospital and he's making jokes about how much coffee I'm drinking, not about what he's facing. So he's just faced it with incredible courage."