The Anglican Diocese of Christchurch has hit back at a group that is against the demolition of the Cathedral, reaffirming it is an unsafe building. 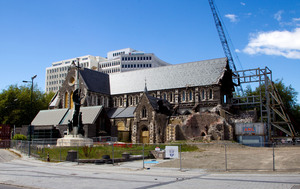 The Church Property Trust has released a engineering report dated 13 February, 2014, which states no part of the building would be stable if an earthquake, of a similar magnitude to the 6.3 one which struck in February 2011 were to occur.

The cathedral is at the centre of a legal battle between the Church Property Trust and the Greater Christchurch Building Trust, which opposes its demolition.

The Church Property Trust published a half page advertisement in The Press on Wednesday outlining why the cathedral is unsafe.

The ad, which refers to the engineers report, says the cathedral's condition is deteriorating due to the effects of weathering and infestation of animals, particularly, pigeons, and plants.

But Greater Christchurch Building Trust spokesperson Jim Anderton said there was worldwide support to save the cathedral, and restoration work could be well under way - if the Anglican Church was not set on demolition.

"The money for the restoration of the cathedral is not a real issue. It never has been," Mr Anderton said.

"It is the will to restore it that has been lacking. The funding and support for doing so has always been there."

The trust and the Anglican Church just needed to have a conversation, Mr Anderton said.