Lawyers for Kim Dotcom are seeking court orders for documents they believe exist but say haven't been given to them. 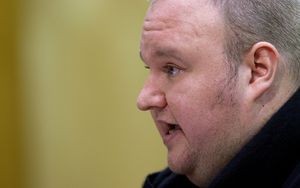 The request is an early stage in the internet businessman's claim for compensation against the New Zealand Government over a raid on his Coatesville mansion, near Auckland, on 20 January 2012.

Lawyer Paul Davison, QC, told the High Court at Auckland on Monday he believes there are documents that government agencies hold that should be part of the legal discovery process. He asked Justice Winkelmann to make orders for the documents to be disclosed if they exist.

Kim Dotcom and his associates are seeking about $5 million in compensation, claiming that the raid and surveillance beforehand were illegal, and that police used unnecessary force during the raid.

However, one of the lawyers for the Crown, David Boldt, told the court they have handed over everything.

"The defendants at least have discovered thousands of documents in this proceeding and have been extraordinarily diligent in scouring records for relevant material. What I can say is, if that material existed, it would have been discovered, and we've sworn affidavits to the effect that this is all there is."

Mr Boldt says some of the documents Mr Dotcom's lawyers are asking for simply don't exist.

Justice Winkelmann has suppressed the nature and identity of the documents. The full compensation case gets underway later this year.

Creditors to be paid two years on

Small business owners owed money by Kim Dotcom and who expect to be paid after two-and-a- half years say it's better late than never.

Kim Dotcom announced via Twitter to announce that Megastuff creditors who had their payments delayed because of asset seizures will be paid this week.

Creditors include companies which carried out work at the Dotcom mansion.

Brian Field from Foleys Water is owed $1700 and said on Monday Mr Dotcom seems to be living pretty well and it's disappointing that the payments weren't made sooner.

Another creditor, Donna Richmond, whose pool company is owed $5000, said she was notified last week that she will receive payment soon. She said it's great news, but it's about time the money was paid.