The Green Party is promising to spend $200 million over four years on making it safer for children to use pedal power to get to school.

The money would go towards initiatives like separate walkways and cycleways, and new lanes to slow traffic. It would also go towards better education within schools about road safety and how to ride a bike.

Under the scheme, $50 million would be made available each year through a contestable fund to which councils could apply for building a network of dedicated cycleways. These would lead straight to the front gates of schools in all the main centres. 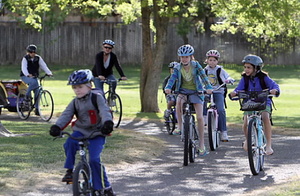 Only a third of children walk or bike to school, compared to half 25 years ago, and the Greens say traffic congestion and young people's waistlines have both increased as a result.

Transport spokesperson Julie-Anne Genter says providing some separation between cars and bicycles is key to lifting participation rates. She says the lack of separation is the main factor identified by those who view cycling as unsafe, especially when it comes to children.

Parents spoken to while dropping off their children at Christchurch's Banks Ave Primary School this week were all wary of letting their children bike to school. Concerns ranged from a lack of awareness on the part of drivers when it came to cyclists to the generally poor state of the roads.

However, all of those spoken to said they would be more willing to let their children cycle if there were dedicated cycleways for them to use. They were also quick to point out the extra benefits of cycling, including the fact that it makes children more alert in class and when they do their homework, and that it encourages independence.

One of the few parents who cycled with her children to school said she was in the minority and lamented the small number of bike in the school bike shed.

Ms Genter says the money for cycleways to schools would be redirected from lower-priority projects such as state highways, and if the initiative worked, then extra funding could be found in the transport budget to extend it further.

She says the money would provide a much-needed boost to initiatives councils are already undertaking, such as the Auckland Council's Travelwise programme.

Travelwise manager Matthew Rednall says that through a mixture of more cycle-friendly roads and education, the council has managed to reduce the number of traffic trips by 12,000 every morning.

He says some Auckland schools now have as many as 30 percent of all pupils riding to class on their scooters - and those figures could easily be replicated for those choosing to cycle.

Auckland University professor Alistair Woodward says a study he co-authored shows that for every dollar spent on cycleways there's another $20 worth of benefits, such as keeping people healthy and making them less of a burden on the health system, less time off work through sickness, a lower road toll and reduced fuel consumption.

Professor Woodward says the research is groundbreaking and should provide a valuable tool for transport planners.