Texas-based oil company Anadarko is "unlikely" to drill a second test oil-well it planned off the Otago coast.

The company's statement comes after leaked industry information indicates Anadarko has not struck oil with its first exploration well in the Canterbury Basin, about 60 kilometres from Dunedin. 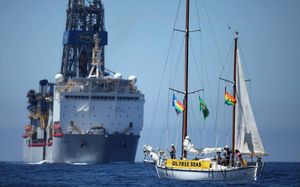 Anadarko has spent about $300 million in deepwater drilling off Taranaki and Otago and appears to have come up dry in both areas.

Unverified drilling information, leaked to Greenpeace, said Anadarko drilled to almost 2700 metres, but the seabed at the site off the Otago coast was 90 percent hardrock granite and schist, and the rest sand and clay and little, if any, oil.

Radio New Zealand has not been able to independently verify the drilling information but industry insiders say it appears credible.

The firm's exploration permit gave the company the option to drill a second test well immediately, and it has previously indicated its keenness to do so if it found enough promise in the first hole.

Anadarko's New Zealand manager, Alan Seay, is not confirming or denying the leaked information, saying the company is still analysing the Otago well data and it is far too early to give results.

But he says a second test well is now very unlikely, and the drilling ship Noble Bob Douglas is likely to be going home before the end of the month.

"In a sense it was the most expected outcome. They were only ever scheduled to do two wells, and the third would have been (done) if things had gone much better than they had had hope for," he says.

"That wasn't the case but I expect Anadarko to back. I expect to see new players at the end of this year, when we have our block offer."

Dugald Roberts from Roberts Oil in South Canterbury said he did not think the leaked information was credible and told Radio New Zealand's Morning Report he believed the prospects of finding oil and gas in the area are good.

He said he hoped Anadarko did not give up because he is sure a vast amount of oil and gas on a global scale is out in New Zealand's southern basins waiting to be discovered.

Supporters of oil exploration off the Otago coast say there is still scope for Anadarko to keep looking in the area.

Dunedin City councillor Andrew Whiley, speaking for Progas Otago, is confident the company will be back. "They reached their depth a week or so ago and they're still out there doing some more drilling - they haven't shut up shop already.

"What that tells me is that they're actually looking and doing a little bit more sideways drilling and seeing what they're finding from the hole."

The Green Party, however, says the documents show National's plans for deep sea drilling are failing.

Anadarko expects to unveil the initial results in about a week.