Scientists have made a rare find in the darkest depths of the ocean.

The New Zealand research vessel Kaharoa is working collaboratively on a international research project in the Kermadec Trench. 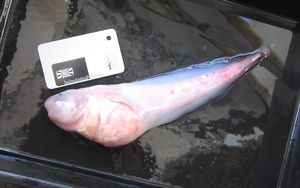 One of the five hadal snail fish caught. Photo: UNIVERSITY OF ABERDEEN

Five hadal snail fish have been caught using specialised equipment at a depth of 7000 metres, allowing scientists to better understand how fish survive at such depths.

It is just the second time this species of fish has been caught, the last being more than 60 years ago. They are also the second deepest fish ever seen alive.

The results of this work have been published this week in the American scientific journal Proceedings of the National Academy of Sciences.

The voyage to the Kermadec Trench to attempt to catch the fish is one of several collaborative trench-related ventures between NIWA and Scotland's University of Aberdeen.

Alan Jamieson from the University of Aberdeen and Paul Yancey from Whitman College in the United States wanted to use the voyage to examine the biochemistry of fish living in deep water, particularly their levels of trimethylamine oxide or TMAO, a stabiliser capable of counteracting the effects of pressure at depth.

They saidTMAO levels are known to be higher the deeper a fish lives and the team wanted to test whether fish had a physiological limit to the colonisation of the deepest ocean depths.

Measures of TMAO in shallower-dwelling fish had led scientists to predict that fish may be limited to depths of about 8400 metres but no measures of TMAO had been obtained from fish found deeper than 5000 m.

Levels of TMAO in the Kermadec snail fish at 7000 metres revealed they had the highest recorded TMAO content.

When this information was added to the previous data, Dr Rowden and Dr Jamieson said, extrapolations showed the maximum depth a bony fish could survive was 8200 metres.

This led the scientists to conclude fish cannot live in the deepest 25 percent of the ocean between 8200 metres and 11,000 metres.