Three new marine reserves covering 435,000 hectares of ocean surrounding the Antipodes, Bounty and Campbell Islands are being established on Sunday. 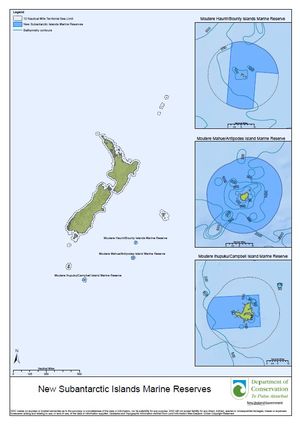 The islands are part of the New Zealand Subantarctic Islands, which Conservation Minister Nick Smith describes as among the most pristine in the world.

Dr Smith says the islands are the world's most important breeding site for albatross such as the Southern Royal Albatross.

There are three species of penguin including the erect-crested that exist only on these islands, and there are significant breeding grounds for the New Zealand fur seal and the New Zealand sea lion, as well as the elephant seal.

The islands are also a breeding ground for New Zealand's rarest whale, the southern right whale.

Dr Smith says the reserves will also protect massive underwater forests of bull kelp - a species larger than any other found in New Zealand. Other unique marine species to be protected are giant spider crabs and white-footed paua.

Dr Smith says the Government hopes to complete a record number of marine reserves this year.