Deputy Police Commissioner Mike Bush will move into the top job in April, taking over from Peter Marshall.

Mr Bush caused controversy in 2013 after praising disgraced officer Bruce Hutton at the Crewe murders investigator's funeral, saying he had integrity beyond reproach. 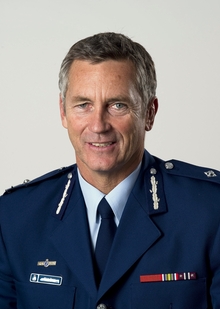 A Royal Commission found that Mr Hutton planted evidence that led to the wrongful conviction of Arthur Allan Thomas for the 1970 Crewe murders.

The Government defended the appointment on Tuesday, with Police Minister Anne Tolley saying that Mr Bush's comment was a bit of a line call and had to be seen in context.

"Put that one incident into a 35-year record of service, and it pales into insignificance. He is an outstanding police officer and I think he will be an outstanding commissioner."

Mrs Tolley said she didn't think he would make the same mistake again.

A police spokesperson said Mr Bush will not have anything to do with the force's ongoing review of the handling of the Crewe murder case by officers including Bruce Hutton.

The Labour Party says it will work constructively with Mike Bush, but stands by its criticism of him last year. At the time, senior MP Trevor Mallard called the eulogy a black mark on Mr Bush's career, saying it showed a severe lack of judgement.

On Tuesday, police spokesperson Jacinda Ardern said the party does not resile from that, but the right move now is to work with Mr Bush. She said she hoped he would have acted differently with hindsight.

The Police Association has congratulated Mike Bush on his appointment, with president Greg O'Connor saying it will be a popular move among staff.

Mr O'Connor said Mr Bush is regarded as someone who has done the hard yards and he is looking forward to working with him.

"The commissioner's job is always going to be a political one. To be fair, he should be judged on the results and those results are going to be about crime and making people feel safer - not relatively peripheral events."

Mike Bush has been deputy commissioner of operations since April 2011 and led a crime prevention programme that has contributed to a 17.4 percent drop in recorded crimes over the past three years.

He has held roles in rural, provincial and urban areas, and as district commander in Counties Manukau pioneered the implementation of Neighbourhood Policing Teams which have since been introduced throughout New Zealand.

Mr Bush was responsible for planning and operations for the 2011 Rugby World Cup, and also led the rollout of smartphones and tablets for frontline staff. He will take over on 3 April.

As police liaison officer for South East Asia, he was the first New Zealand official to reach Phuket following the devastating Boxing Day tsunami in 2004. He was made a member of the New Zealand Order of Merit for his work during the operation.

In a statement on Tuesday, Mike Bush said he was honoured to become the next commissioner and has been passionate about the job since joining the force in 1978 as a young constable.

"My leadership priorities for the role will be delivering the results important to New Zealanders - being safe and feeling safe in our communities and putting victims at the heart of everything we do."

Mr Bush paid tribute to Peter Marshall who he said championed change at police to deliver better results to the Government and New Zealanders and to better support the victims of crime. Under Mr Marshall, reported crime and road deaths have continued to fall.