Coal company Bathurst Resources is to shed 29 office jobs as it announces a further delay to the opening of its new Denniston Plateau mine on the West Coast. Nine of the jobs are in Westport. 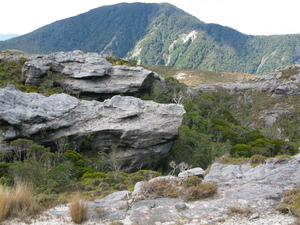 Bathurst Resources plans to mine this area of the Denniston Plateau. Photo: Debs Martin

The mine was expected to open in April this year and generate 200 jobs but has now been delayed, mainly due to the slump in the coal export market.

Bathurst managing director Hamish Bohanan said on Tuesday the company must preserve cash as it waits for the price of coal to go back up.

Mr Bohanan said the international price for coking coal is at its lowest level in nine years. In the past two years alone, it had plummeted by more than half from over $US300 per tonne in 2012 to a current spot price of about $US120 a tonne.

Bathurst Resources says it would just break even if it started production now. Mr Bohanan said no jobs in any of its mines are at risk, as it is primarily a corporate down-sizing.

The firm still intends to prepare everything on the plateau in readiness for mining once the Department of Conservation grants it an authority to enter and operate.

But the Coal Action Network Aotearoa is asking Conservation Minister Nick Smith not to issue Bathurst with the consent it needs to begin the preparatory work on the project.

Spokesperson Cindy Baxter said a situation could arise where the company could eventually go under, having destroyed the plateau for no reason.

The Forest and Bird environment organisation has called on Bathurst to halt all work on the project immediately to prevent any further damage to the unique eco-system of the area.

Meanwhile, a panel made up of councils, iwi and the Department of Conservation is also yet to announce whether Bathurst has met the hundreds of consent conditions upon which it gained its resource consent.

Businesses in the area have already been affected by the loss of 300 jobs at the nearby Stockton mine, and looming job losses at the Holcim Cement plant where 120 people are employed.

Buller Industrial, an engineering firm that derives 85 percent of its income from the mining industry, says it has gone from having 25 employees to 12 since the job losses at the Stockton mine.

Manager Kathleen Reynolds said the company was hanging on to its remaining staff in the hope Bathurst's mine would open in April, but the future now looks bleak for them.