A leading aid agency says Immigration New Zealand is being heartless as it considers deporting a woman back to a cyclone-ravaged area of Tonga. 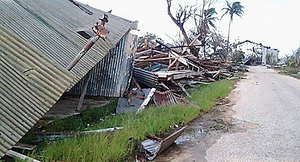 More than half the region's 8000 population was made homeless and most of their crops have been destroyed when Cyclone Ian struck in early February this year.

Oxfam's director Barry Coates says his organisation will be in the Ha'apai area for months to come and has distributed everything from food and desalination kits to farming tools and fishing nets.

His comments come after Radio New Zealand News revealed that immigration authorities are trying to deport the woman with a heart condition back to Ha'apai, despite her doctor warning her against flying.

The woman came to New Zealand with her husband and two children on a working visa in the 1990s and stayed on when the visa expired. Her husband, to whom she has been married 24 years, has been deported.

Mr Coates says it is ill-advised for Immigration New Zealand to send someone back to an area so badly damaged by the cyclone. "It would seem to be a pretty heartless decision to send somebody back to an area where there had been a major natural disaster."

Labour's Pacific Islands Affairs spokesperson Su'a William Sio says it is inhumae to deport the woman and called on the Government to show some compassion and intervene. He believes Immigration New Zealand is putting the woman's life at risk and supports a call for a two-month moratorium on deporting people to the area.

Mr Sio says Pacific Island Affairs Minister Sam Lotu-Iiga asked for genuine examples of people being sent back to Ha'apai, and now he has one. Radio New Zealand has sought comment from Mr Lotu-Iiga, but he has not returned calls.

'You're sending them to die'

A member of the Tongan Advisory Council says deporting Tongan overstayers with medical conditions back to the islands devastated by the cyclone is "sending them to die".

Melino Maka says the situation in the Ha'apai group is bleak and many there are reliant on the generosity of the Tongan community living in New Zealand, who have so far sent 10 containerloads of food and water.

Mr Maka says he supports the idea of a temporary halt on deporting people to that area. "Please have a bit of compassion before you send these some of these people to Tonga," he says, "especially the people who head to Ha'apai, because you're sending them to die."

Many people there are sleeping under tarpaulins, he says.

In October last year, four Immigration officers visited the South Auckland home of the woman - whom Radio New Zealand has chosen not to name - and took away her husband. She says he was given no interpreter or independent legal advice before being deported to Tonga and is now living in cramped conditions with extended family.

"She lives with his nephew there," the woman says. "The only thing he gets is they have to go to the plantation to get their food from there or they have to go fishing. There is no work for him there. He says life is hard."

She says living without him is tough. "You can't sleep. You have to think how is he doing in Tonga? How is he faring there? Who is going to give him money? Because the children and I have sent him money almost every week since he left, to support him."

Authorities advised of her state of health

The woman says she worries what will happen if she is sent back with her heart and thyroid condition. Her doctor has written to authorities detailing her state of health and the medication she is on; the letter, seen by Radio New Zealand, also says she's unfit to fly.

She has been to Middlemore Hospital several times, has also seen a specialist and now owes thousands of dollars in medical fees.

She says that if she is sent back, the nearest hospital in Ha'apai is about the size of a small house and does not have the facilities to treat people with heart problems.

She says if Immigration Minister Michael Woodhouse was in her living-room, she'd ask him to stamp her passport. "The stamp on the paper is what will count at the end of the day and I would love to get the stamp on my passport, telling me that I have got permanent residency here in New Zealand. That would be the last wish come true."

The woman's case has been referred to Associate Immigration Minister Nikki Kaye, who confirms she has had a request from her lawyer, Richard Small, for intervention.

Ms Kaye declined a request to be interviewed, but in a letter to Mr Small she acknowledges that Cyclone Ian has had a substantial impact on Tonga and the ability for some people to return has been compromised. She says she will consider the impact of the cyclone but only after the immigration process takes place.

Immigration New Zealand asked for a privacy waiver from the woman before commenting. Radio New Zealand provided the agency with the document, but it still declined to be interviewed.