The Transport Agency was swamped with people at its first open day, held to explain controversial road project plans to ease traffic congestion north of Wellington.

The agency's Petone to Grenada Link road is a potential new link between Tawa, Porirua and the Hutt Valley.

The most significant plans include an option to build a new road through the untouched rural Takapu valley or widening the existing State Highway 1.

A Petone interchange above State Highway 2is also being considered. 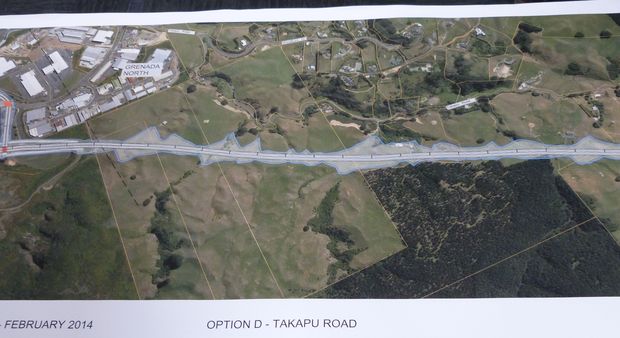 The route of the new road could go through Takapu Valley. Photo: RNZ

During the weekend residents flocked to the first of two information days to get straight talk on how the road projects could change their lives.

The Transport Agency's Wellington Roads of National Significance Programme Manager, Selwyn Blackmore, says speculation is wrong that building a new road through Takapu Valley is the preferred plan over widening the highway.

"No real difference between the two from a construction perspective...it is two very comparable options for us. It's really going to come down to what councils think as well as the locals think.

Both road projects will cost about $250 million each.

Locals have their say

Chair of Tawa Community board Robert Tredger was at the open day, and isn't impressed with either option.

"I don't think either are particularly brilliant options and really we have to look and see how much they are going to be impacted and the impact it will have on Tawa as a whole."

Wellington City Councillor Malcolm Sparrow says the open day was the first time he had had the opportunity to really study the maps, which is frustrating as many residents have been coming to him for information for several weeks, which he didn't have.

The Petone to Grenada link road project has the potential to reduce congestion on State Highways One and Two and make peak journeys between the Hutt Valley and Porirua about ten minutes faster and seven kilometeres shorter.

There was a steady stream of locals through the entire open day Photo: RNZ

The flow of local people with questions about the projects never let up with about 100 filling the room all day.

David Jaquiery lives on Takapu Road, where noise and fume pollution would be the main problem for him if the new road goes ahead.

He's taking a pragmatic approach to the situation, saying sacrifices were made when State Highway One and Two were built.

"In time it all sorted itself out. So time will cure this and if you don't like it, well I suppose you have to move out."

Mr Jaquiery, who has lived in the valley for 15 years, says it is not an option to do nothing.

Plans to build a road through Takapu valley have not been favoured in the past.

In a 2012 report relating to the Transmission Gully road project, an assessment by an acoustic engineer for the Transport Agency and the Porirua District Council, and the Takapu option was rejected due to the effect on residents.

And in 1990, an impact report about the future State Highway One, done by the Parliamentary Commissioner for the Environment, also points to a Takapu valley road plan as being studied and rejected.

Another Takapu Valley resident, Alpaca breeder Stephen Mulholland who stands to lose his three best paddocks if a road is built, says those reports should be taken seriously.

He is confident the arguments to build a road there can be systematically destroyed.

Another information day is being held by the Transport Agency on Wednesday in Tawa, and a decision on whether to build a road through the Takapu Valley or widen State Highway One will be made by the end of the year.