There was strong support for a change to the New Zealand flag among people gathered at Waitangi for the Waitangi Day celebrations. 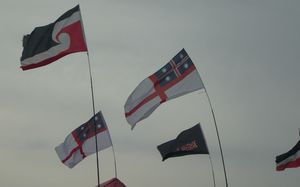 Last week, Prime Minister John Key floated the idea that it was time for a change.

People spoken to by Radio New Zealand at the Treaty grounds on Wednesday agreed that a change in the national flag was needed to better reflect the place of Maori.

One person wanted the 1835 flag to become the new national ensign because it was the first flag recognised in New Zealand.

Another favoured the koru as used by Air New Zealand, but in green to represent the country's clean, green image.

Others suggested a design mixing the current flag and the Tino Rangatiratanga flag.