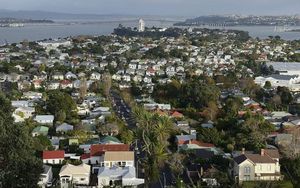 The Government says its housing reforms, including streamlined resource consent applications, have helped promote this.

Housing Minister Nick Smith said the increase in new home approvals should help overcome a shortage of 25,000 houses in Auckland alone, and he credits an accord reached between the Government and the Auckland Council.

"The accord has made a real practical difference to freeing up both building and resource consents. The considerable feedback I have had from the industry is those practical changes are getting more subdivisions and more houses being consented more quickly."

However a professor of property at Auckland University, Larry Murphy, says building activity is still one third lower than it was 10 years ago.

ASB economist Christina Leung says the rising number of immigrants could end up living in some of the new properties, which will probably remain expensive.

Auckland Council believes a robust economy - with growth reaching 3.5 percent - also helped the rush to build more homes but it says its own recently liberalised rules on building did play a part.

Master's Builders' Federation chief executive Warwick Quinn said the says the percentage increase is disproportionately high because too few houses were constructed in the previous five years. His view is that the long term yearly average should be 22,000 to 25,000 homes.