The Aucklander, whose real name is Ella Yelich-O'Connor, won Grammys for Song of the Year and Best Solo Pop Performance in Los Angeles on Sunday. She also took to the stage to perform Royals. 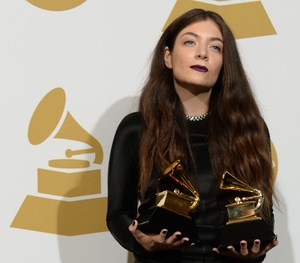 Lorde at the awards ceremony in Los Angeles. Photo: AFP

Lorde has not been back to school since her career took off last year. While she was partying with Beyonce and Taylor Swift before and after the awards, it was back to school time for her friends at Takapuna Grammar on the North Shore.

Acting principal Brian Wynn told a Year 13 assembly on Tuesday the school is incredibly proud of her. "Who would've dreamed a year ago that she would be the top of the pops in LA, a double Grammy award winner. Really, it is a historical moment for us all."

Several hundred students then stood up, cheered and applauded her success.

Friends say her success isn't surprising in the slightest and she's still the girl they know as Ella. One-time classmates Tamara Bullock, Brooke Stilwell and Luca Denee says it is obvious watching her on stage that she hasn't changed a bit.

"I had music with her in Year 9 and you could tell then ... she had just interesting rhythms to share with our group," said one.

"You can tell by the way she is on the stage. She's still got her quirky, different Ella - you know who she is. She's herself, she's amazing," said another.

Another friend, Albert Cho, was in contract with Lorde after the ceremony. "I congratulated her and she replied and said thank you. She's really humble, she like to kind of just accept the messages, she just likes to just keep it at that."

They all try and keep in touch with her as much as they can, helped by Lorde keeping a separate, private Facebook account just for that.

A former teacher told Radio New Zealand's Morning Report programme that Lorde's talent was obvious from a young age. Leon Jacobs taught her at Belmont Intermediate School in Auckland and ran a rock band she was in.

Mr Jacobs said the scale of her success was incredible but, looking back, her talent was plain to see even as a 12 and 13-year-old. He had also always been impressed by Lorde's humility and that came through during her acceptance speech at the Grammys. 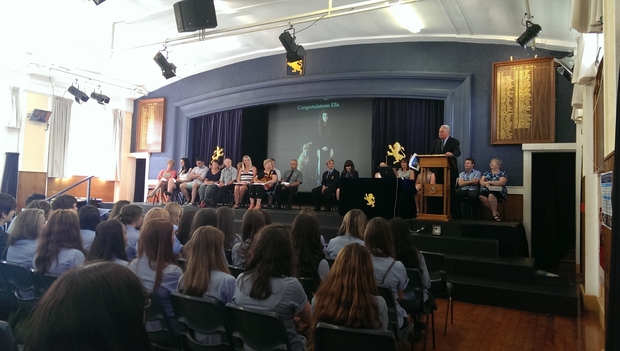 Students cheered and applauded Lorde's success at an assembly on Tuesday. Photo: RNZ 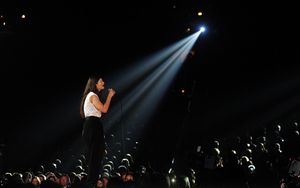 Ms Yelich said her daughter also attended a couple of other after-parties. "The people who really matter in this whole journey, we were on the rooftop having our own party, a good, big bunch of us out there and it culminated in us all jumping in the pool in our Grammy clothes."

Mr O'Connor said he was dumbfounded to hear his daughter's name called out among such distinguished company. He said he expected she would be working to release something this year.

"Ella's got all sorts of things going on in that brain of hers, and I know she's got a lot of stuff that she wants to get out and over the next six months I'm sure that she will create something new."

Mr O'Connor said his daughter and the family would be flying home in time for a free concert in Auckland on Wednesday.

Parliament on Tuesday congratulated Lorde on her success. Prime Minister John Key told the House that she has busted stereotypes and won hearts along the way.

"She has just achieved something no New Zealander has. And it has happened so quickly and so comprehensively it's taken the world by surprise. In less that a year, Lorde has gone from a Year 12 Takapuna Grammar student to superstardom."