New Zealand singer-songwriter Lorde has won two awards at US premier music awards, the Grammys, in Los Angeles. Her single Royals topped the charts around the world last year. 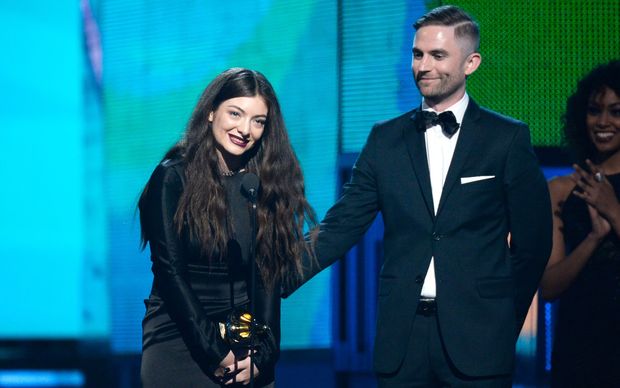 Lorde, whose real name is Ella Yelich-O'Connor, was nominated for four Grammys - record of the year, song of the year, best pop vocal album and best pop solo performance.

The 17-year-old Aucklander took the awards for best solo pop performance and song of the year with her producer Joel Little at the Staples Center on Sunday night.

Lorde said she is thankful to Mr Little who is helping her have a successful career. "This guy has nurtured me though my first years of songwriting, which I will forever owe him. Thank you to everyone who has let this song explode - 'cause it's been mental."

Mr Little said to be accepting an award at the Grammys was an unbelievable experience. "I just want to say we made this song originally just to give it away for free. So to be here now in this room with so many legends and people whose work I admire is a complete honour, so thank you for that." 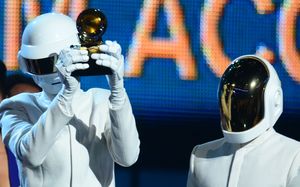 She also missed out on the record of the year, won by eclectic French electro duo Daft Punk. They also won single of the year for Get Lucky featuring Pharrell Williams and Nile Rodgers.

Music royalty and power couple Jay Z and Beyonce opened the show. Katy Perry was burned at the stake and Pink spun high above the audience in a trapeze routine, the BBC reports.

Rap duo Macklemore and Ryan Lewis picked up best new artist, as well as best rap album. They performed their song Same Love, which has became an anthem for the same-sex marriage movement, as 33 heterosexual and same-sex couples got married on stage, presided over by Queen Latifah and the wedding singer, Madonna.

Other guest performers at the 56th Grammy Awards included the two surviving Beatles, Sir Paul McCartney and Ringo Starr, who made a rare joint performance coinciding with the 50th anniversary of the British group's breakthrough on American television. Sir Paul picked up the trophies for best music film and best rock song for Cut Me Some Slack, a collaboration with the surviving members of Nirvana.

"We can't believe what has happened - to get two awards it's amazing. One would've been amazing. Just to be here was incredible - but two get two awards, we're just totally blown away, shocked."

Before the Grammys, he said it had been a surreal and life-changing year. "I'm very happy with the fact that she's just been nominated, to tell you the truth. It's been an amazing, amazing ride - so whatever happens we're proud of her."

Lorde will perform at a free show in Auckland on Wednesday for those who bought tickets to the Laneway Festival she had been scheduled to do before being nominated for the Grammys.

Australasian Performing Rights Association's general manager Anthony Healy says her double win is a unique achievement for someone so young and the world is Lorde's oyster right now.