Earthquake Recovery Minister Gerry Brownlee says he expects a high level of confidence in the Christchurch rebuild this year as work begins on key anchor projects. 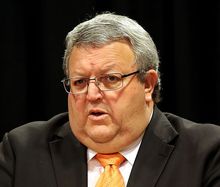 Work started on the Justice and Emergency Services Precinct in central Christchurch on Wednesday, one of 16 major projects. Nine others are due to get under way this year.

Mr Brownlee says beginning these projects will bring a high level of confidence to the rebuild following the damaging earthquakes.

Work on the North and East Frames - green spaces that will frame the central city - took a big step in January with the grassing of five large sites, he says.

He says in a few years' time the spaces will be interspersed with housing for up to 2000 people and will be an exciting place to live, work and play.

The Canterbury Earthquake Recovery Authority's chief executive, Roger Sutton, says the dropping of a $100 million development in the central city will not affect the rebuild.

The landowner is reported to have abandoned the site as a result of high construction costs, reluctant tenants and uncertainty over car parks.

Mr Sutton says construction and business are flowing in and there are 100 building projects being consented at present.