New Zealand scientists have discovered a new type of prehistoric dolphin that swam in the seas around this country about 20 million years ago.

Researchers at Otago University have named the dolphin Papahu taitapu, using the Maori name for dolphin and the area in the northern South Island where its bones were found.

They said Papahu was about the same size as a modern dolphin but had a wider head with less of a dome on top.

The scientists said the discovery was important because it filled a gap in the evolutionary record of dolphins. 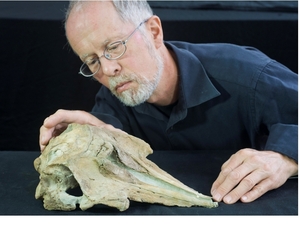 Professor Ewan Fordyce from the Department of Geology said the Papahu was about the same size as a modern dolphin but had a wider head with less of a dome on top.

"When we look at it we think gosh it's a dolphin ok and it's a bit like modern forms, but when we look closely it differs in quite a few fine details. The structures in this little Papahu dolphin help us understand the transition from the very early archaic extinct dolphins into some of the more modern forms."

The fossil is on display at the University's Geology Museum.