The Real Estate Institute says there is a growing number of houses contaminated by methamphetamine and warns prospective buyers to test for the drug as well as getting LIM and building reports.

The institute says contamination in properties used to make the drug, also known as 'P', can be hard to detect, but can cause breathlessness and skin burns. 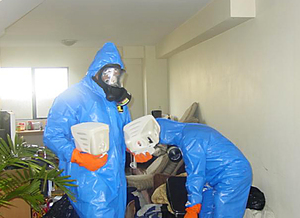 Chief executive Helen O'Sullivan says rental homes are particularly susceptible to being used as P-labs - but any home can be targeted, with cases found in houses from Remeura to Flaxmere.

Ms O'Sullivan says the institute's property managers are educated in how to do swab tests to detect methamphetamine. Tests cost from $100 to $500.

A company that decontaminates houses of residue left over from making P says its workload has doubled in the past year.

Contaminated Site Solutions does work on behalf of the Ministry of Business, Innovation and Employment, as well as for private homeowners and Housing New Zealand.

Owner Victor Boyd says has had to hire more staff and buy more equipment to cope. Over the past 12 months, the company has been decontaminating four to five houses a week; previously it was two or three.

Mr Boyd says publicity about the issue has spurred homeowners and property agents to investigate more thoroughly the health of their houses - but often people don't learn of the problems until they have purchased them.

Young people who mortgage themselves to the hilt struggle to hold on to their home, he says, because they can't afford the $20,000 to $40,000 decontamination bill. Nor do they always have insurance cover that includes decontamination.

Mr Boyd says rental properties in rural areas are particularly popular with people making the drug due to their isolation.